5 Ideas for Your Leftover Pumpkins 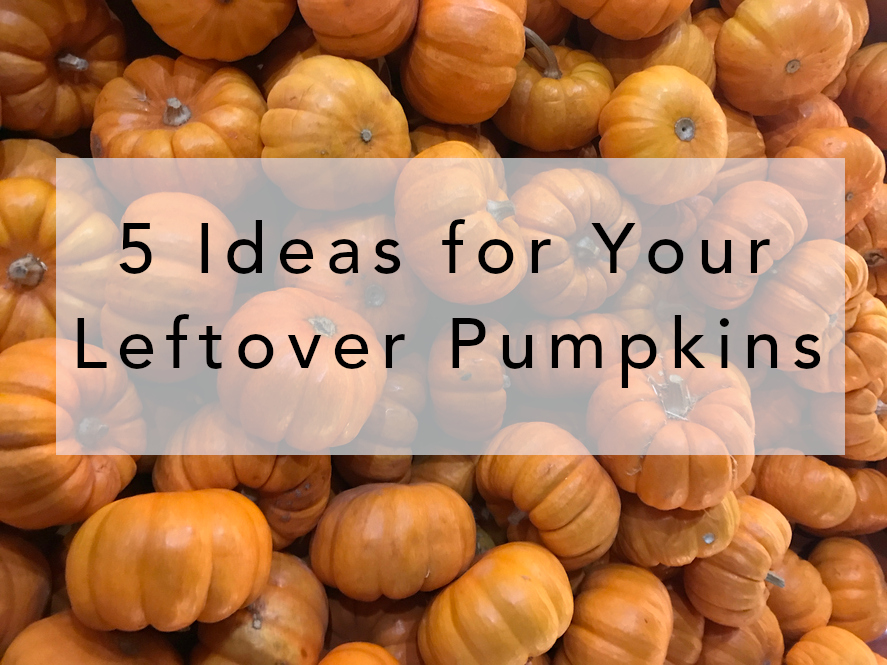 Once Halloween has passed, It seems like such a shame to throw away those pumpkins. Just think of how hard you worked to get them to grow! You want to get the most out of them, so here are a few ideas for what you can do with those leftover pumpkins.

Pumpkins That Have Not Been Carved:

Obviously, your pumpkins will last longer if you have not already dug into them. You might be able to get another 2-4 weeks out of these gems, as long as you keep them preserved well.

1. Make a Thanksgiving Decoration
Pumpkins make a perfect centerpiece for a holiday-themed table. If your pumpkins are fresh enough, they should be able to keep for the 4 weeks until Thanksgiving. Dress them up with whatever crafty supplies you have around. Or use a variety of sizes to make a statement in orange (or another color, if you’ve chosen to paint them!)

2. Paint with Chalkboard Chalk
Want to make a message your family will be sure to see? Dip your pumpkin in chalkboard paint and set it out prominently with your warm greeting (or request).

3. Cut It Open and Do Some Baking
Come on, the best thing about pumpkins is pumpkin pie! Have you ever tried it from fresh pumpkins? Use this recipe if you want to give it a try. Or if you aren’t as ambitious, you can still get a taste of autumn by roasting the seeds once you have cleaned the pumpkin out.

You’ve probably seen the best out of your pumpkin at this point. Even if you have followed directions to preserve your carved pumpkin, you will still start to see mildew form within the next week or two (especially if it was kept outside). But there are still a few things you can do in that final week or so before they are completely spoiled.

4. Play a Game of Bean Bag Toss
What else would you expect to do with a newly emptied container? Throw something in it! And if you have a highly competitive family, you know they will enjoy another excuse to build up points against one another.

5. Make a Fun Mess
Smashing pumpkins isn’t just an old rock band. You and the kids will have a blast coming up with ways to destroy your pumpkins. If you want to create a catapult to launch them across your land or maybe a trebuchet, the kids could learn a lot. You could even get famous at a future Punkin Chunkin World Championship for your efforts! Even if you are just curious or want to make a fun mess, there are plenty of ways to destroy a pumpkin. Baseball bat? Dropping from an upper level window? Or plain brute strength in shot putting? Just make sure no one is around to get hurt.

Even if you haven’t planted pumpkins on the land you just purchased in Burke County or Waynesboro, GA, there’s still time! Take the seeds from the pumpkin you have bought (or even the whole pumpkin!) and place it in your garden. Next year, there’s no telling what those vines will yield for you.